It’s been an intense month in a my personal life and even more intense (exciting!) months to come. So before I get too busy, let’s turn my notes (that can only be read by me), into a blog post!

In early April this year, I had the honour of speaking at Testbash Essentials on the Wednesday. I also had the opportunity to attend the main Testbash Conference on the Friday and learn a lot from the speakers.

Before the conference day, I also attended a workshop on Context Driven Coaching, which I really enjoyed.

Here are my notes on what I learned in the first few talks I was able to attend (I had to leave a bit early to make my flight back home).

“Have you ever asked yourself, are you good enough?”

Lisi didn’t come from a technical background —> she fell into testing.

She was mostly the lone tester at a company and didn’t have a mentor. But now at her current company there are more testers.

“I’m basically just managing my list, but not learning something.”

She shared her struggled in learning new things and constantly having to edit a to-do list.

When she met Toyer, they helped each other get out of their comfort zones.

She then created a goal: 10x pairing sessions with at least 6 different testers. Each 90min long.

Claire Reckless and Jahmel Harris - United by Security: The Test that Divides us.

How did it work?

“If there are heaps of vulnerabilities, it makes it harder for the pen testers to know which vulnerability they should focus on”. 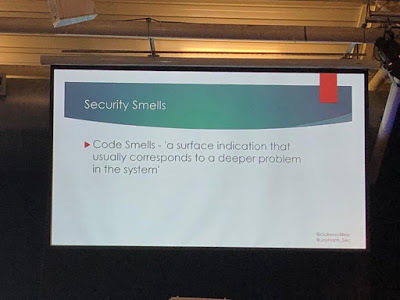 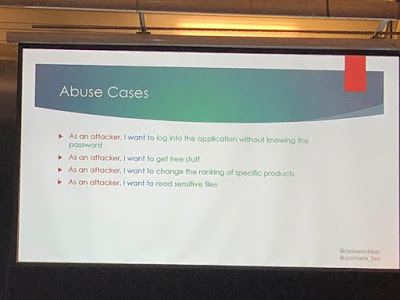 Ultimately it often came down to a people problem

New project with lots of new technology and new concepts he was unfamiliar with.

-->This led to imposter syndrome

-->Then he admitted how little he knew

It’s not cool to like what we do (at work). A lot of us are surrounded by miserable people.

Mike wanted to get better: “It wasn’t just my day job, it was my craft.”

If there were things he had to do multiple times, he taught himself how to automate it; write a script for it.

Mike learned to be easier on himself e.g. When he missed a bug, he wouldn’t feel guilty - instead he would get curious and try to make it happen again and again.