Preparing my talk I started preparing my talk around 2-2.5 months before the conference. But I didn’t properly gain momentum until about 1.5 months before my talk. Initially I tried to write the whole talk in Google Docs - but I found that didn’t work for me. Instead, I ended up creating the slides and writing speaker notes below. I aimed to have a completed presentation ASAP and then just edit it continuously up until I gave my talk. I find it a lot easier to edit a presentation that’s complete than to add more to one that is incomplete. Pre-Testbash Shindig at Puppet Belfast It was awesome. I got to meet some people I hadn’t seen in yonks (too many to mention, you know who you are!) and also got to meet some people I hadn’t met in real life before such as Nick Shaw and Ash Coleman. I steered clear of the alcohol as I didn’t want to be hungover for my talk the next morning (yes my tolerance is that low I can’t even handle 2 glasses of wine). 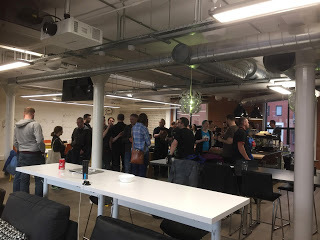 There was also this really cute dog in the office I kept trying to get selfies with - but failed miserably. 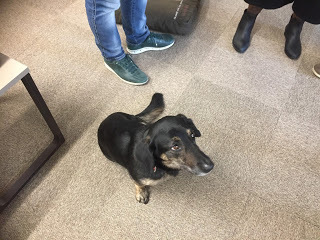 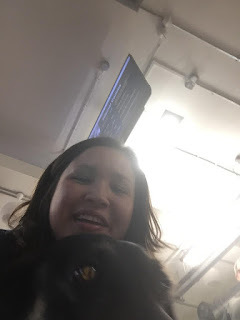 First half of the Conference

We kicked things off with a talk by Liz Keogh on Cynefin for Testers. Some key tidbits that stood out to me were her explaining to us that often people think they have certainty when they really don\’t. She also explained to us how people may think they are working in one part of the Cynefin model (e.g. the complicated domain) when they are in fact in another part (the complex domain) To illustrate this, she asked us how many people have been asked for estimates when we didn’t know for sure what the estimated time would be - then she asked, how many people found their estimates ended up being a promise.

After, we had Jeremias Rössler talk about Tested by Monkeys - the end of Banana software. I liked his explanation of Traditional Monkey testing: which is easy to implement and finds bugs - but can’t distinguish between bugs that are of interest to the stakeholders and bugs that aren’t.

After the break we had Mark Winteringham talk about the Automated Testing Paradox. Below is a visual representation of it: 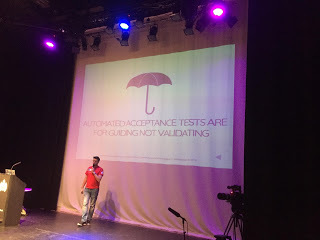 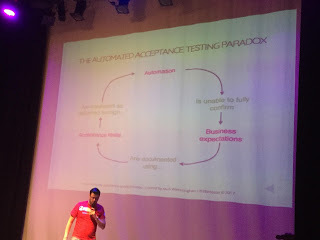 Just before my talk, we had Rob Meaney. Unfortunately I only caught 10min of his talk before I went to another room to mentally prepare for mine. I heard from lots of people that it was an amazing talk and I hope I get to see him speak at a conference or meet-up in the future.